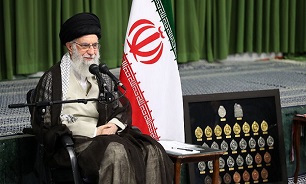 He made the remarks in a Wednesday meeting with a group of Iranian students who have managed to collect medals in different international science olympiads as well as members of Iran’s U21 volleyball team which collected the world title last week.

“Achieving beneficial scientific progress for the country is possible through a revolutionary, Islamic-based approach, and elite youths must set the primary goal for reaching the frontiers of science and technology and pushing them forward,” said the Leader.

“Despite the efforts that have been made in the scientific and technological movement after the Islamic Revolution, especially in the past twenty years, we still have a long way to go, and the most important task of the elite generation is to push forward the boundaries of knowledge in addition to continuing their successful scientific path,” Ayatollah Khamenei stressed.

Refereeing to Iran’s great achievements and top ranks in the field of nanotechnology, he noted, “it is now expected that elite and next-generation youth would discover hundreds of such fields as nanoscience as well as unknown scientific phenomena in areas such as biotechnology. They should not be satisfied with the mere continuation of the scientific path.”

Elsewhere, Ayatollah Khamenei pointed to Iran’s winning the title of 2019 FIVB U21 Men’s World Championship, saying, “thanks to God, our youth volleyball players were able to turn into a source of pride and stand at the top of the world. This is a very valuable achievement that made people happy.”

He went on to say that gaining this trophy with an Iranian coach is so important. “I have always believed that it befits the country’s sports teams would have Iranian coaches.”