TEHRAN (defapress) - The United Nations chief has expressed concern over "restrictions" in Indian-administered Kashmir as the Muslim-majority territory remained under an unprecedented security lockdown and a near-total communications blackout for a fourth day.
News ID: 78330 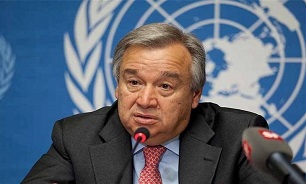 The statement by Antonio Guterres on Thursday came as Narendra Modi, the prime minister of India, defended the controversial stripping of special rights from the disputed region as necessary to stop "terrorism and separatism".

Hundreds have been arrested since Monday, according to local media, in the wake of the decision by Modi's Hindu-nationalist government to downgrade the portion of Kashmir it administers from statehood to a territory, limit its decision-making power and eliminate its right to its own constitution.

Guterres said he was "concerned over reports of restrictions on the Indian-side of Kashmir", adding the curbs "could exacerbate the human rights situation in the region".

The UN secretary-general also appealed for "maximum restraint" and urged India and Pakistan "to refrain from taking steps that could affect" the regions status.

New Delhi's move has heightened tensions with Pakistan, which has expelled the Indian envoy to Islamabad, halted the cross-border train service and banned Indian films in protest against what it called an "illegal move".

Kashmir is claimed in full by both India and Pakistan, although each controls only a part of it.

The contesting claims have led to two of the three wars between the neighbors being fought over Kashmir. India has also accused Pakistan of supporting rebel groups who have been fighting Indian rule in the portion it administers.

In New Delhi, meanwhile, an activist filed a petition at the Indian Supreme Court challenging the curfew in Kashmir, and requesting the release of people who have been detained as part of the crackdown.

University professors, business leaders and activists are among the 560 people rounded up by authorities and taken to makeshift detention centres - some during midnight raids - in the cities of Srinagar, Baramulla and Gurez, the Press Trust of India and the Indian Express reported.