US Would 'Enthusiastically' Support No-Deal Brexit for UK

TEHRAN (defapress)- National Security Adviser John Bolton on Monday stated that the United States would support a no-deal Brexit if that is what the British government decides.
News ID: 78381 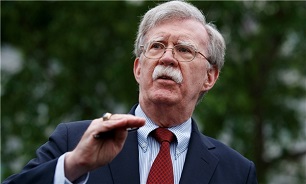 “If that is the decision of the British government we would support it enthusiastically,” Bolton told reporters Monday, according to Reuters.

British Prime Minister Boris Johnson is an ardent Brexit supporter. He vowed to negotiate a deal to leave the European Union by late October.

But the negotiating parties are facing an impasse as the EU will not alter a part of the deal Johnson said needs to be changed, leaving Britain without any formal transition period or legal agreement, Reuters reports.

Bolton also told reporters the United States could agree to trade deals on a sector-by-sector basis and leave more difficult areas in the trading relationship for later.

President Donald Trump on Monday spoke by phone with British Prime Minister Boris Johnson and told the new UK leader he hoped to meet with him "in the near future", according to The Hill.

The two leaders discussed trade, global security and other issues, according to a White House readout of the call.

Trump expressed appreciation for the UK's partnership with the US and told Johnson he "looks forward to meeting with him personally in the near future".

That meeting is likely to take place at the Group of Seven (G-7) summit in France later this month.

Trump has spoken fondly of Johnson, who was once critical of the president and has been a staunch advocate of Brexit.

The president has expressed a desire to reach a bilateral trade agreement with the UK, but the pact will be dependent on whether the country follows through on Brexit.