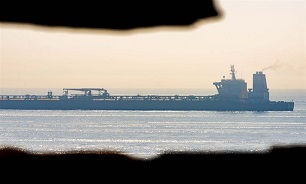 Its destination was not immediately clear.

Britain’s naval forces unlawfully seized the vessel, then known as Grace 1, and its cargo of 2.1 million barrels of oil in the Strait of Gibraltar on July 4 under the pretext that the supertanker had been suspected of carrying crude to Syria in violation of the European Union’s unilateral sanctions against the Arab country.

Iran’s ambassador to Britain, Hamid Baeidinejad, had written on Twitter earlier that the vessel was expected to leave on Sunday night, adding that two engineering teams had been flown to Gibraltar.

The tanker’s detention ended last week, but a US federal court in Washington on Friday issued a warrant for the seizure of the tanker, the oil it carries and nearly $1 million.

Gibraltar said on Sunday it could not comply with that request because it was bound by EU law.

“The EU sanctions regime against Iran – which is applicable in Gibraltar - is much narrower than that applicable in the US,” the government said in a statement.

“The Gibraltar Central Authority is unable to seek an Order of the Supreme Court of Gibraltar to provide the restraining assistance required by the United States of America.”

Earlier on Sunday, video and photographs showed the tanker flying the green, white and red flag of Iran and bearing its new name, painted in white, on the hull. Its previous name, ‘Grace 1', had been painted over.