TEHRAN (defapress) – Iranian President Hassan Rouhani said details of the country’s third step to reduce its commitments under the 2015 nuclear deal, known as the Joint Comprehensive Plan of Action (JCPOA), would be announced on Thursday.
News ID: 78595 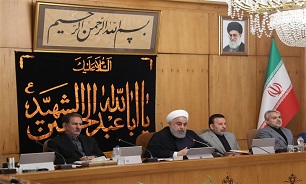 Speaking at a cabinet session in Tehran on Wednesday, Rouhani said talks between Iran and other parties to the JCPOA to save the deal are ongoing.

“Despite resolving an important part of the differences with Europe, we have yet to reach a final agreement,” he added.

“Within this framework, Iran will take the third step in reducing its obligations under the JCPOA and announce the details of this step today or tomorrow and will act accordingly,” the president said.

“I don’t think we would be able to reach a final agreement today or tomorrow, so we'll take the third step…,” he stated.

Speaking to reporters at a press conference in Tehran on Monday, Spokesman for the Iranian Administration Ali Rabiei referred to recent talks between Rouhani and his French counterpart, and said, “In the past few weeks, there have been serious negotiations between the two presidents."

“Fortunately, the views have become closer on many issues,” he said, adding, “Technical discussions on European commitments are now underway.”

Iranian Foreign Minister Mohammad Javad Zarif said in a recent interview with the Sueddeutsche Zeitung newspaper that Tehran’s third step to reduce nuclear obligations would be taken on September 6 if Europe fails to meet Iran’s demands to fulfill its JCPOA commitments.

Back in July, Iran declared the second step to reduce its commitments by ramping up the level of uranium enrichment to over 3.67 percent.

Iran maintains that the new measures are not designed to harm the nuclear deal, but to save the accord by creating a balance in the commitments.

Spokesman for the Atomic Energy Organization of Iran (AEOI) Behrouz Kamalvandi recently said that the country’s enriched uranium stockpile has reached 360 to 370 kilograms.