TEHRAN (defapress)- Russian President Vladimir Putin stated that the leading role of the West is coming to an end, and no serious international group makes much sense anymore without economic juggernauts like China and India.
News ID: 78614 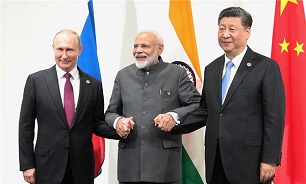 Putin shared his thoughts on the Group of Seven (G7) during the Eastern Economic Forum, held outside Vladivostok in Russia’s Far East on Thursday, RT reported.

He was asked whether he would attend the group’s meeting in the US next year if invited. US President Donald Trump announced last month he will “certainly” invite Putin.

The Russian president hinted that G7 leaders should instead travel to Russia where the last G8 event was due to take place, in 2014, prior to Moscow’s expulsion from the group.

“We’re open [for contacts], and if our partners want to travel here, we’ll be happy [to host them],” he said.

Putin added, however, that the G7, in its current composition, is not up for the task of solving global issues.

"I think it’s clear to everyone now – and [French] President [Emmanuel] Macron has recently said so publicly – that the leading role of the West is ending. I cannot imagine an effective international organization without India and China," he noted.

Last week, after the G7 meeting in France, Macron admitted that “Western hegemony” is ending and urged a rethink of the West’s approach towards Moscow.

The Group of Seven comprises the US, Canada, Britain, France, Germany, Italy, and Japan. Moscow joined in the late-1990s, but was expelled in 2014 after Crimea’s reunification with Russia.

The importance of the G7 on the world stage has been called into question, as China is now the world’s second largest economy, and India is on course to becoming the third.