TEHRAN (defapress)- Iranian Defense Minister Brigadier General Amir Hatami said that his country’s economy will do well under sanctions by putting an end to its dependency on crude exports, reminding enemies that his compatriots will never give up resisting pressures.
News ID: 78841 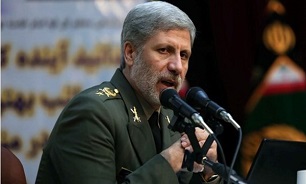 Speaking during a ceremony to commemorate the Sacred Defense Week on Friday, Hatami said that the enemies' plots will be foiled after the economy ended its dependency on oil and other sorts of income from selling raw materials.

Hatami said that through proper planning and putting an end to oil dependency, Iran will become the biggest economy in the region as its military has already become the most powerful in the region.

The defense minister further warned the enemy that the Iranian nation will not give up and will continue its resistance.

Last month, Iranian Vice-President and Head of the Management and Planning Organization Mohammad Baqer Nobakht said that his country is determined to draft its new budget bill with zero-dependence on oil revenues in a bid to disappoint the US with its maximum pressure campaign against Tehran.

Following the US’ unilateral withdrawal from the Iran nuclear deal last year, US President Donald Trump's administration went ahead with re-imposing sanction on Iran, targeting the country’s energy and banking sectors, and stepping up efforts to drive Iran’s oil revenues to zero.

In April, the White House announced its decision not to renew waivers that allow eight countries, including China, Greece, India, Italy, Japan, South Korea, Taiwan and Turkey, to buy Iranian oil without facing US sanctions.

Meanwhile, Iran says with or without waivers, the country’s oil exports will not fall to zero under any circumstances. At the same time, the country is making efforts to reduce its reliance on oil revenues and instead turn its focus on non-oil production and exports.

Back in July, Iranian Parliament Speaker Ali Larijani underlined the US failure to cut to zero his country's oil exports, saying that Washington has been defeated by Iran's smart moves.