TEHRAN (defapress) – Police in Spain said Wednesday they arrested 30 people overnight across Catalonia for their roles in clashes with police during protests over the jailing of nine separatist leader over a failed 2017 independence bid.
News ID: 78977 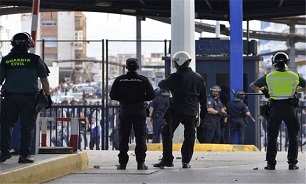 Pro-independence groups staged sit-ins outside Spanish government offices in a number of Catalan cities late Tuesday, with around 40,000 people taking part in Barcelona and 9,000 in the separatist stronghold of Girona, according to municipal and regional police.

The protests ended in clashes with police in many cities.

In Barcelona, police charged hundreds of masked demonstrators who threw projectiles at officers and set garbage containers and cardboard boxes on fire.

Catalonia’s regional police, the Mossos d’Esquadra, said 14 people were arrested in the port of Tarragona, six in Barcelona and ten others in other Catalan cities for disobeying authority and causing a disturbance, AFP reported.

Monday’s ruling unleashed a wave of protests, with Catalan separatists enraged by the Supreme Court’s decision to hand heavy prison sentences of between nine and 13 years to leaders convicted of sedition over the 2017 separatist push.

That culminated in a banned independence referendum and short-lived declaration of independence in October of the same year.