Attempts to Draw into NATO Countries with Internal Tensions Are Dangerous 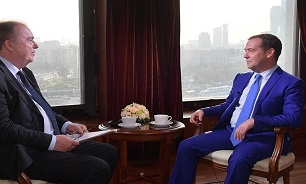 "You see, all attempts to draw into NATO countries that have internal political tensions are very dangerous," Medvedev told Serbia's Vecernje Novosti newspaper ahead of his official visit to Belgrade.

He made the remark in response to a question on what Russia thinks about attempts to draw Bosnia and Herzegovina into the North Atlantic Alliance.

"You are talking about Bosnia and Herzegovina, Republika Srpska, but we can name other countries as well. What is hapenning with Georgia? What is happening with Ukraine? These countries find themselves in very uneasy positions," he added, Tass reported.

Medvedev said that Russia has its own interests when it comes to ensuring national security. "We are a large country, a nuclear power, and the plan to set up NATO bases in proximity to us all around cannot elicit positive emotions from us. We have always responded and will respond to such steps — both politically and militarily," he added.

"When NATO tries to attract countries with internal conflicts, this firstly contradicts the agreement on establishing the North Atlantic Alliance, and secondly, it can lead to very serious consequences," he continued. "That's why member countries of NATO should think twice before making such decisions. By the way, that's exactly why the idea of ensuring autonomous European security bypassing NATO is gaining traction in Europe now. We'll see what happens next," Medvedev concluded.