TEHRAN (defapress)- President Recep Tayyip Erdogan vowed to continue Turkey's military operation in Northern Syria upon expiry of the 120-hour ceasefire, brokered within a Turkish-US deal, if Washington fails to observe its commitments in terms of ensuring the withdrawal of the Kurdish troops from the agreed area.
News ID: 79049 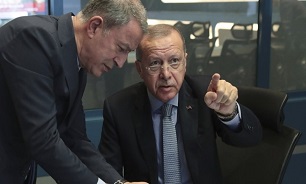 "If the withdrawal of terrorists is not completed, we will continue the operation once the 120 hours expire," Erdogan said in a broadcast streamed by the NTV channel.

The statement comes after the US and Turkey announced on Thursday concluding a deal on halting the Turkish operation, dubbed Peace Spring, for 120 hours for the Kurdish forces to leave the area within an 18-mile so-called safe zone, which Ankara intends to control unilaterally. Despite the deal, both Ankara and the Kurds have reported violation of the truce by the rival side.

Operation Peace Spring in Northern Syria began on October 9. The offensive is part of Ankara's goal to clear its Syria-facing border area of Kurdish militia, which Ankara designates as terrorists, and create a safe zone where Turkey could relocate part of more than 3.5 million Syrian refugees it currently hosts.

The international community has been vocally critical about Ankara's operation, with a number of countries — including Turkey's and Russia's co-guarantor of the Syrian ceasefire, Iran, — calling upon Erdogan to immediately stop the military action and withdraw troops from Syria. Moscow, in turn, has urged Ankara to refrain from actions that could create obstacles to settling the war in Syria.