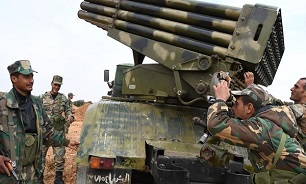 Ras al-Ein is located in Northwestern Hasaka province and 85 kilometers from the city of Hasaka and near the borders with Turkey.

On Saturday, the Syrian Army had deployed in Western regions of the city of Qameshli in Hasaka province and they were warmly welcomed by the residents of these regions.

Amid a warm welcome by people, Syrian forces entered Um al-Keif village on Tal Tamar-Ras al-Ein road to face the Turkish aggression and protect civilians from any attack by Ankara-backed militants.

Several military vehicles carrying army soldiers moved on Friday afternoon from Qamishli city to be deployed in the Western countryside of Hasaka to face Turkish assault and protect the people.

On Saturday, units of the Syrian Army had entered the administrative borders of Ras al-Ayn city on Tal Tamar-Ras al-Ein axis North of Hasaka, walking into the eight villages of al-Qasimiyah, al-Rashidiyah, al-Dawodiyah, Azizyah, Dhara, Sibatiyyah, Jumayliyah and Khirbet al-Dibs to reach the Syrian-Turkish borders.

Government forces have deployed several units to the Turkish border during the past week, and promised to reinforce their troops in the next few days.