TEHRAN (defapress) – Senior Chinese and US officials again sent positive signals on Friday about their efforts to formalize the partial trade bargain announced last month, with US President Donald Trump saying he may meet with Chinese counterpart Xi Jinping in the state of Iowa.
News ID: 79175 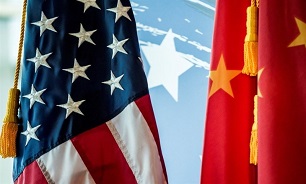 Chinese vice Premier Liu He on Friday spoke by telephone with US Trade Representative Robert Lighthizer and Treasury Secretary Steven Mnuchin, a call both sides described as "constructive."

However, details remain scarce and the positive statements were almost identical to those made last week, even though Trump announced the partial deal on October 11.

Trump had planned to sign a deal with China's leader Xi Jinping on the sidelines of the now-cancelled summit in Chile this month.

On Friday, Trump told reporters he was "looking (at) a different couple locations" for a meeting with Xi, adding that it "could even be in Iowa."

The rural state in America's heartland was the first place Xi ever visited in the United States, when he came to the country in 1985 to study farming technology.

Trump noted that negotiations are "moving along" and "our deal's going along fine with China" but stressed repeatedly that he didn't want to give more details until the agreement was finalized.

The office of the US Trade Representative (USTR) said in a statement that negotiators had "made progress in a variety of areas and are in the process of resolving outstanding issues."

In Beijing, China's Commerce Ministry said the two sides discussed "properly addressing their core concerns and reached consensus on principles" and "discussed arrangements for the next consultations."

"The deal is not complete but we've made enormous progress," Kudlow told reporters.

He said the discussions are nearly complete on currency, financial services, dealing with removing restrictions on majority foreign ownership of companies in China, and opening markets to US agriculture exports, AFP reported.

Other issues like protecting US intellectual property and stopping forced technology transfer likely will wait until "phase two," Kudlow said.

The upbeat statements reaffirmed Washington's hopeful message on trade with Beijing after a week in which the two sides exchanged a salvo of confrontational remarks.

Wall Street shuddered Thursday after Bloomberg reported that Chinese officials were skeptical of reaching a long-term trade deal with Washington.

Trump three weeks ago hailed a "very substantial phase one" accord with Beijing, which he said would cover key areas and include a commitment for a massive increase in US farm exports.

After a lengthy boycott, China has resumed some purchases of US agricultural goods but demand may not support the huge increases Trump expects.

Hopes for a signing ceremony at the November 16-17 Asia Pacific Economic Cooperation summit in Santiago were sidelined after the event was canceled due to civil unrest.

Earlier in the week, US Secretary of State Mike Pompeo delivered a speech calling China "truly hostile" to the United States while Beijing accused Washington of "viciously attacking" China.

Meanwhile, in a separate disagreement dating from long before the Trump administration, the World Trade Organization on Thursday authorized China to slap tariffs on $3.6 billion in American exports in a dispute over US anti-dumping practices.

The two sides have put tariffs on virtually all of their half trillion dollars in annual two-way goods trade, but last month signaled a truce as Trump held off on some duty rate increases.

The trade war is slowing global growth, economists say, and data shows it is cutting into the US manufacturing sector and chilling business investment.