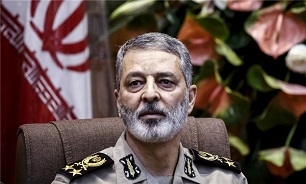 "One of the goals that we pursue in the Army's Ground Force is training multi-skilled forces and multi-purpose units," General Mousavi told reporters in Tehran this morning.

He added that these forces should be trained in a way that they will be able to carry out their mission in its best way in any weather conditions, any geographical point and against any special threat.

The Iranian Army has recently been widening plans with special attention to its ground troops.

"Three Mohaher 6 combat drones joined the drone fleet of the Ground Force and we will witness a new arrangement in the drone operations of this Force," Commander of Vali-e Asr drone group of the Army Ground Force Brigadier General Shahram Hassannejad said.

He added that Mohajer is capable of destroying targets powerfully and with a high precision power, adding that it can also detect and monitor the regions under the control of the Ground Force.

General Hassanzadeh also said that high range, considerable flight durability up to 24 hours and capability to carry rockets with high-precision power for day and night missions are among other features of the drone.

Also, in October, the Iranian Army in a ceremony unveiled five new home-made hi-tech military products to enhance power of the ground troops in anti-terrorism battles and other war theaters.

One of the unveiled achievements was a state-of-the-art light vehicle, namely 'Rouintan' (immortal), which is resistant to steel core bullets. It has the defense standards of Iran, is surprisingly agile and powerful, and fully protects the passengers. The vehicle can be used in fighting against terrorists or in classic battlefields.

Also, Heydar 1 smart robot was unveiled. It has six active wheels, can carry loads and turn 360° and detects obstacles on its path.

Another important product of the Army unveiled last month was Farpod drone, a small hand-launched drone used for reconnaissance and rapid reaction operations. It is equipped with auto-pilot and can take pictures round the clock.

Meantime, a domical jamming system with the capability of being mounted on vehicles and fixed areas and detecting the targets on monitor as well as a system to guide and control anti-armor 'Labeik 1' missiles which enjoy precision-striking power were unveiled in October.