TEHRAN (defapress) – Cuban Ambassador to Iran Alexis Bandrich Vega described the economic sanctions imposed by the US government against his country over the past decades as contrary to the international law and tantamount to genocide.
News ID: 79190 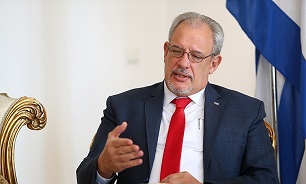 Speaking to reporters at a press conference at the Cuban Embassy in Tehran on Sunday, Vega underlined the negative impacts of the US economic blockade over the past decades on the Caribbean island nation.

For the past two years, the blockade’s intensification has been at the heart of US policies against Cuba, and each time, it has had increasing effects, he stated.

The sanctions against the Cuban nation are a blatant systematic violation of human rights, the diplomat said.

The economic blockade on Cuba is tantamount to genocide, according to the Convention on the Prevention and Punishment of the Crime of Genocide adopted by the United Nations General Assembly in 1948, he went on to say.

Havana wants an end to this unjust blockade that has been inflicted on the Cuban people for almost 60 years and has caused suffering, Vega stated.

Tougher US sanctions against Cuba have led international banks to avoid transactions involving the island, while prospective overseas investors put plans on hold and foreign firms operating in the country consider restructuring to lower their risk exposure.

On top of the decades-old embargo, the US administration has sanctioned nearly 200 Cuban military-run companies and hotels as well as any company or vessel involved with shipping Venezuelan oil to Cuba.

In April, US President Donald Trump also activated Title III of the 1996 Helms-Burton Act, which allows Americans to sue US and international companies profiting from property that was nationalized or confiscated after Cuba’s 1959 Revolution.