TEHRAN (defapress) - The Syrian army forces have seized a large amount of US-made weapons from dens of terrorists in the Daraa, Hama, and Damascus provinces during past few days.
News ID: 79219 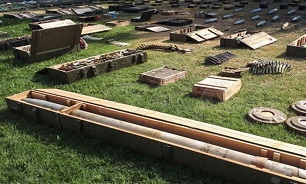 According to SANA, the weapons consisted of large amounts of ammunition, rockets, artillery and mortar shells, assault rifles, and missiles as well as a significant number of US-made anti-tank TOW missiles and toxic substances that had been provided to militants in southern and northern Syria.

These missiles would later play an imperative role in the militant offensives against the Syrian Army, as they were able to take out several tanks and military positions in provinces of Idlib and Hama.