TEHRAN (defapress)- China's Foreign Ministry launched a renewed attack on US Secretary of State Mike Pompeo on Friday, saying that his recent criticism of the Chinese Communist Party was "extremely dangerous" and exposed his "sinister intentions".
News ID: 79235 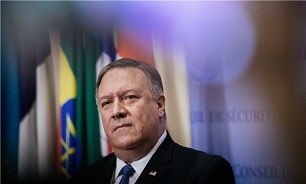 Last month, Pompeo stepped up US rhetoric against China's ruling Communist Party, saying Beijing was focused on international domination and needed to be confronted. China at the time called it a "vicious attack", presstv reported.

China has been consistently irritated by Pompeo, whether over his remarks on China's Belt and Road infrastructure project or allegations of Chinese rights abuses in the far Western region of Xinjiang, and in many other areas.

"Pompeo is splitting apart and setting in antagonism against each other the Chinese people and the Chinese Communist Party in an attempt to provoke their relationship," Geng added.

The party has always represented and safeguarded the interests of the Chinese people and has won their deep trust and loyal support, he noted.

"It must be pointed out that Pompeo's comments are extremely dangerous and seriously inconsistent with his position as US Secretary of State," he added, noting, "They fully expose his sinister intentions of fishing for political capital by being anti-China."

He should stop "jabbering on" with his unwarranted criticisms of China, Geng said.

China's stepping up of rhetoric against Pompeo comes as China and the United States seek a truce in their trade war by signing a "phase one" trade deal.

The world's two largest economies have other serious areas of disagreement, including the disputed South China Sea, US support for Chinese-claimed Taiwan and human rights, especially in heavily Muslim Xinjiang.

Pompeo on Friday issued a stark warning against China and Russia on the eve of the 30th anniversary of the fall of the Berlin Wall.

"Western, free nations have a responsibility to deter threats to our people" from governments like China, Russia and Iran, Pompeo said, speaking just a few meters away from where the Wall ran past the German capital's world-famous Brandenburg Gate.

The US and its allies should "defend what was so hard-won... in 1989" and "recognize we are in a competition of values with unfree nations", he added.

Chancellor Angela Merkel has repeatedly stated that the pipeline is a purely private business concern.

He warned of "Chinese companies' intent to build 5G networks", after the German government failed to exclude tech giant Huawei from the bidding process for the next-generation mobile network infrastructure.

Pompeo is on a whirlwind two-day tour of Germany where he has revisited the site of his Cold War military service on the former Iron Curtain border and is slated to meet leaders including Merkel.

While in Europe, he has looked to shore up transatlantic relations eroded by trade conflicts and discord over geopolitical crises and military spending.

Spurred by the US leaving the way open to Turkish and Russian military action in Northern Syria, France's President Emmanuel Macron told The Economist this week that the NATO alliance --- of which Ankara is also a member --- was suffering a "brain death" of lack of coordination between Europe and Washington.

Recalling past "challenges between partners" within NATO, including France's 1960s departure from the alliance's command structure, Pompeo on Friday dismissed the debate around Macron's comments as a "kerfuffle".