TEHRAN (defapress)- Iranian Minister of Industry, Mining and Trade Reza Rahmani announced that Tehran and Bishkek have decided to increase the value of their trade exchanges up to $500mln.
News ID: 79502 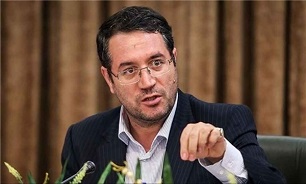 Rahmani said on Wednesday that economic exchanges between Iran and Kyrgyzstan would soon increase to nearly $500 million, up from a meager figure of $40 million that exists currently.

Speaking to reporters after a meeting with Kyrgyzstan’s minister of economy Sanjar Mukanbetov in Tehran, he said that trade between the two would further surge in the years to come.

Rahmani said the two countries have agreed on efforts that would facilitate the trade schemes, including the launch of direct flights and easing visa restrictions for economic delegations.

He said Iranian manufacturers have declared plans for investment in Kyrgyzstan as they seek to have more access to the markets in the Central Asia region.

Iran and Kyrgyzstan enjoy a long record of cooperation and friendly ties.

Iranian President Hassan Rouhani, in a message to his Kyrgyz counterpart Sooronbay Jeenbekov, in September voiced hope that bilateral ties between Tehran and Bishkek would grow further and deeper.

Rouhani forwarded a message of felicitations to his Kyrgyz counterpart offering congratulations on the anniversary of the Independence Day of the Central Asian country.

He expressed his hope that the good relations between Tehran and Bishkek continue to grow and further expand and deepen in all political, economic and cultural areas.