All Bahrainis Opposed to Normalization of Ties with Israel 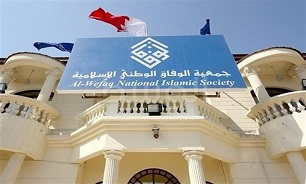 Al-Wefaq said in a statement released on Tuesday that the invitation of Jerusalem (al-Quds) Chief Rabbi Shlomo Amar to a “mock event” hosted by the Bahraini regime substantiates the aggressive and provocative stance that Manama authorities have adopted vis-� -vis the people of Bahrain besides Arab and Muslim nations.

“The entire Bahraini nation from all strata of the society is opposed to normalization (of diplomatic relations with the Israeli regime) and such cheap propaganda programs. These steps are only favored by the ruling regime, which has not been appointed by popular vote, and rules the country with an iron fist. It, therefore, implements provocative individual policies at different levels,” the statement read, according to Press TV.

Al-Wefaq then called on the Manama regime to cease its acts of provocations and treacherous normalization projects since they do not legitimize and decriminalize the ugly dictatorship in Bahrain.

The statement concluded by emphasizing that the Al Khalifa regime’s talk of tolerance and coexistence projects is a flat-out lie given the realities on the ground.

On Monday, Amar concluded his visit to Bahrain, where he attended a conference of religious leaders at the invitation of King Hamad bin Isa Al Khalifa.

During his visit, which was organized by the Israeli Foreign Ministry, the senior Israeli rabbi met with the king and religious figures from several other Arab countries, including Kuwait, Qatar, Egypt, Jordan, and Lebanon.

“Middle East nations want peace with Israel, the leadership should promote that without fear,” Amar said during his stay, expressing hope that in the future, such visits would not require special preparation.

The report said the meeting was held in April, when the 69-year-old Bahraini monarch paid a visit to the Hungarian capital city of Budapest under the guise of holding talks with President Janos Ader and strengthening bilateral relations.

The source added that the meeting was held as a preparatory event for the so-called Peace to Prosperity workshop, which opened in Bahrain on June 25 and ran through the following day.

It apparently sought to advance the economic aspects of President Donald Trump’s controversial proposal for “peace” between the Israeli regime and the Palestinians, dubbed “the deal of the century.”

The Palestinian leadership boycotted the meeting, prompting critics to question the credibility of the event.

The secret meeting between the Bahraini ruler and Netanyahu was described as intimate, and took place while the Israeli prime minister was on holiday with his family. The holiday was cut short for a day. Netanyahu traveled to Budapest to meet King Hamad, and then returned the same day without any media coverage, the diplomat pointed out.

The source went on to say that the Bahraini king had expressed his great satisfaction with the meeting, stating that the relations with Israel must develop beyond diplomatic ties, and that he is looking forward to the formation of alliance in various political, security and military fields with the Tel Aviv regime against Iran.

During the meeting, King Hamad stressed that he represents Saudi Arabia and the United Arab Emirates in their aspirations towards forging relations with Israel, and that the security of the Tel Aviv regime is the security of the Arab littoral states of the Persian Gulf.

Speaking in an interview with the English-language The Times of Israel daily newspaper on the sidelines of the US-led economic workshop in Manama on June 26, Bahraini Foreign Minister Sheikh Khalid bin Ahmed Al Khalifa recognized Israel’s “right to existence,” saying the regime was “there to stay, of course.”

“Who did we offer peace to (with) the (Arab) Peace Initiative? We offered it to … Israel … We want better relations with it, and we want peace with it,” Khalifa added.

He pointed to the so-called Arab Peace Initiative as the blueprint for normalization of diplomatic relations with Israel, terming the Tel Aviv regime’s rejection of the plan as a “missed opportunity.”

The Arab Peace Initiative, proposed by Saudi Arabia in 2002, calls on Israel to agree to a two-state solution along the 1967 lines and a “just” solution to the Palestinian refugee issue. The initiative has been repeatedly endorsed by the Arab League in 2002, 2007, and 2017.

The Bahraini foreign minister further encouraged Israel to approach Arab leaders about issues of concern regarding the proposal.

“Come and talk to us. Talk to us about it. Say, guys, you have a good initiative, but we have one thing that worries us,” he said.