Saudi Arabia has no option but to normalize ties with Iran

TEHRAN (defapress) – Iranian Parliament speaker's special adviser on international affairs voiced his belief that Saudi Arabia has no other choice than returning to normal relations with Iran.
News ID: 79665 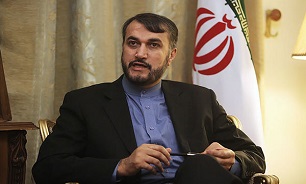 Hossein Amir-Abdollahian met with a visiting group of students and members from Japan’s Sasakawa Peace Foundation on Monday in Tehran.

During the meeting, when asked about the prospect of reconciliation between Iran and Saudi Arabia, he said “We have always welcomed constructive and good neighborly relations with Saudi Arabia and believe that Riyadh has no other way than to return to normal relations with Tehran.”

He went on to add, however, that “the current rulers of Saudi Arabia have prioritized the wrong way of war by overt and support of terrorists over a political solution, and in doing so, have undermined the security of the region. We hope to see the Riyadh rulers change their attitude towards the security and stability of the region.”

While discussing Israel’s destabilizing measures in the region, the Iranian parliamentary official said “The Islamic Republic of Iran has submitted a democratic solution to the United Nations that calls for a referendum among the genuine people of Palestine, including the Jews, Christians and Muslims.”

“Of course, the Zionists who have also played the genuine Jews living in occupied Palestinian lands, have shown that they only understand the language of resistance,” he added.