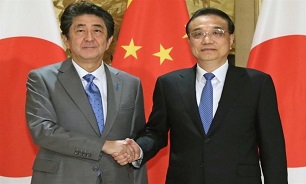 In a meeting in the southwestern Chinese city of Chengdu, Abe told Li that he wants to make the recent improvement in ties sustainable and promote "constant" high-level exchanges and dialogue, according to the Japanese Foreign Ministry, Kyodo News reported.

Li was quoted as saying that momentum has been maintained for improving Sino-Japanese ties, adding that they are now back on a "normal track."

The meeting took place during Abe's three-day visit to China through Wednesday where he held a trilateral meeting with Li and South Korean President Moon Jae In.

Before flying to Chengdu, Abe also held talks with China's Xi in Beijing on Monday whom the Japanese prime minister plans to receive as a state guest despite outstanding issues such as Hong Kong's prodemocracy demonstrations and China's assertiveness in the East and South China seas.

In Wednesday's meeting with Li, Abe was quoted as saying, "No true improvement in Japan-China ties can be achieved without stability in the East China Sea."

Chinese ships have been spotted near the Japanese-administered Senkaku Islands in the East China Sea. Beijing claims the islands and calls them Diaoyu.

The series of top-level meetings this week were intended to lay the groundwork for the Chinese president's first state visit since assuming the post in 2013. On Wednesday, Japanese Foreign Minister Toshimitsu Motegi and his Chinese counterpart Wang Yi held talks in Beijing.

After their 50-minute meeting, Abe and Li visited the Dujiangyan irrigation system, a World Heritage site some 50 kilometers northwest of Chengdu.

The irrigation system was constructed in the Qin Dynasty and helped contain flooding and deliver water from the Min River. But it was damaged by a major earthquake that hit Sichuan Province in 2008.

When Li made his first visit in his current capacity to Japan in May last year for a trilateral summit, Abe accompanied him to the northernmost island of Hokkaido.