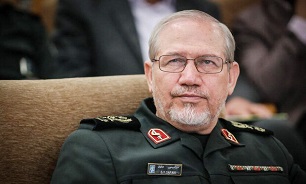 "They should know that the Iranian nation is ready to foil any conspiracy," he added noting that during confrontation with the US in the Persian Gulf, "Iranian martyrs delivered six slaps to the US."

He also referred to the occupied Iands in Palestine admitting that "the Israeli regime, who wished to connect Nile to Euphrates, is feeling insecurity in those lands."

"Syrian and Iraqi governments have learnt resistance from the Islamic Republic of Iran and its Leader," he added, "Having Iranian martyrs as their symbols, Yemenis have resisted against enemies for five years."

He added that the Leader of the Islamic Republic can break the equations of the foreigners only with the power of his words and speech.

In earlier remarks, the Iranian top military aid had said "Our power has improved beyond the Iranian borders. We have changed from a national power into a regional one and the Americans are well aware of the meaning of Iran’s influence in the region. Their pressure on Iran is a result of their anger at our influence."

"If one observes the events occurred at the UN General Assembly in the past few days, they can understand Iran’s logical and robust behavior towards the Americans and that Iran has become so powerful that it can withstand their pressures," he added.

"Americans and Zionists and their minions have become weak and America's weakness is shown in their disability to control the situation in Syria and also to overthrow Bashar al-Assad," the Iranian Major General said.