TEHRAN (defapress) – Leader of the Islamic Revolution Ayatollah Seyyed Ali Khamenei conveyed a message and expressed his deep condolences on the martyrdom of Commander of IRGC Quds Brigade, General Ghasem Soleimani and emphasized that Iran will take tough revenge on criminals.
News ID: 79767 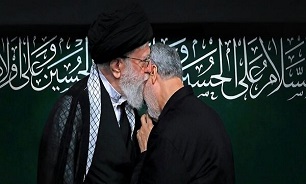 "The great and courage IRGC Commander General Ghasem Soleimani was martyred this morning. He attained martyrdom after years of sincere and courageous struggle in the battlefields. I express my deep condolences on the martyrdom of IRGC Quds Brigade General Ghsemi Soleimani," reads the message.

"He was a prominent model of an educated person in the School of Islam and also School of the late Imam Khomeini (RA) and dedicated all his life for the sake of the Almighty God," he said, adding, "enemies should bear in mind that the Islamic Republic of Iran will take tough revenge on criminals over the martyrdom of Gen. Ghasem Soleimani."

The noble nation of Islamic Iran will endear the sublime name and memory of General Ghasem Soleimani and others who were martyred in this tragic incident especially Abu Mahdi al-Muhandis the deputy commander of Iraqi Popular Mobilization Forces (PMU) and some of other forces of the PMU, said the leader.

"I announce three days of public mourning in the country and once again express my deep condolences to his bereaved families.

Issuing a statement IRGC announced that the Iranian commander was martyred in a US airstrike early morning today.

Soleimani was a key figure in the fight against terrorism in Iraq and Syria.