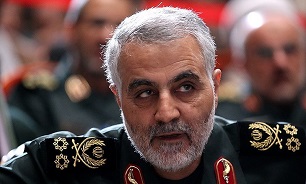 In the early hours of January 3, a US drone strike assassinated Gen. Soleimani, the commander of the Quds Force of the Islamic Revolution Guards Corps (IRGC), and Abu Mahdi al-Muhandis, the deputy chief of the Iraqi pro-government Popular Mobilization Units (PMU), near Baghdad International Airport.

Four other Iranians and four more Iraqis in their company were also martyred.

The Pentagon said in a statement that Trump directly ordered the US military to assassinate the top Iranian commander.

The assassination prompted Iran to take revenge by pouring more than a dozen ballistic missiles on two military bases housing US troops in Iraq early on Wednesday.

Both commanders were admired by Muslim nations for eliminating the US-sponsored Daesh terrorists in the region. General Soleimani, in particular, was an international figure who played a leading role in promoting peace and security in the region, particularly in Iraq and Syria.

In an editorial of the terror group’s weekly propaganda al-Naba publication on Thursday, Daesh praised the assassination of Gen. Soleimani and al-Muhandis, saying they “died” at the hands of its “allies” - a clear reference to the US, Press TV reported.

Many believe that Washington created the Daesh terrorist group and helped it rise and commence its reign of terror and destruction in Syria and Iraq in 2014.

Later, on August 10 of the same year, Trump reiterated what he had said several months ago, stressing that Obama was “the founder” of Daesh, whose co-founder “would be ‘Crooked’ Hillary Clinton.”

Furthermore, there are multiple reports of American aircraft airlifting Daesh commanders from various parts of Syria to safe places.

In November 2017, Russia’s RIA Novosti news agency cited several eyewitnesses as saying that US aircraft had recently picked up Daesh commanders from the town of Mayadin, which was later liberated.

A month earlier, reports from a group affiliated with the Syrian opposition also alleged that the US military had several times airlifted Daesh Takfiri terrorists amid the Syrian army’s advances on Deir ez-Zor province.

The US has long been accused of colluding with Daesh to provide safe passage and logistical support to its members in conflict zones.

The Syrian army troops, backed by Russian airstrikes, managed to remove Daesh from all of its urban strongholds in the country. In Iraq, the PMU forces, better known by the Arabic name Hashd al-Sha'abi, did the same against the terror group, prompting former Iraqi prime minister Haider al-Abadi to announce the total defeat of Daesh in the Arab country in late 2017.

However, the remnants of the Takfiri group, which conduct terror sporadic attacks against Iraqi security forces and civilians alike with increasing regularity, attempt to regroup and wage a new era of its reign of terror and destruction in the region.

Following the assassination, US-led NATO suspended its training mission in Iraq over claimed security fears. Furthermore, some of the allied troops attached to the mission have been withdrawn from in the Arab country for their safety.

The Daesh terror machine could start once more in the absence of Gen, Soleimani, who had a decisive role in eliminating the terror group from the region through military advisory presence in both Arab countries.