Palestinian PM Says Trump’s Plan Nothing But Proposal of Apartheid

TEHRAN (defapress)- Palestinian Prime Minister Mohammad Shtayyeh dismissed US President Donald Trump’s so-called deal of the century on the decades-old Israeli-Palestinian conflict, stating that the initiative was only a proposal for an apartheid system that legitimizes the Israeli regime’s colonial project in Palestinian territories.
News ID: 80071 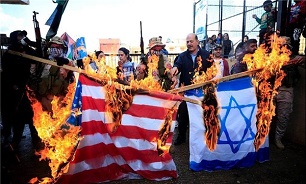 Speaking in an exclusive interview with CNN television news network on Thursday, Shtayyeh said the Palestinian people and leadership have rejected the deal because it “simply gives al-Quds (Jerusalem) completely to the Israelis, creates a temporal and spatial division of the al-Aqsa Mosque, and keeps settlements on Palestinian land, where 720,000 settlers would remain illegally on our lands”.

He also rejected Trump’s claim that his proposal "could be the last opportunity" for Palestinians, noting, “This is not an opportunity, nor a prelude to negotiation, but rather the maintenance of the fait accompli while calling it a Palestinian state."

“This plan is 100% biased with the Israelis, and it is in complete harmony with what [Israeli PM Benjamin] Netanyahu wants, because he is the real author [of the plan]. The plan carries his same language, ideas and speeches that we heard and read previously,” Shtayyeh pointed out.

The Palestinian prime minister added that “Israel should not be allowed to be above the law. It violates human rights, seizes Palestinian lands, and illegally builds settlements.”

“The United States cannot grant things it does not possess. These are Palestinian lands, and Israel cannot annex any part of them… What is happening now is that the US administration is trying to create a new reference for the [peace] solution and give legitimacy to this annexation. This is a very dangerous situation,” Shtayyeh noted.

He also rejected Trump’s plan that envisages the proposed Palestinian capital be located in Abu Dis, a neighborhood on the outskirts of Jerusalem al-Quds.

“Al-Quds (Jerusalem) is not any part of Jerusalem; al-Quds is the old town and the surrounding area and the entire basin of the Holy City, where 300,000 people live. Al-Quds is the city that was occupied in 1967,” Shtayyeh stated.

On Tuesday, Trump unveiled his so-called deal of the century, negotiated with Israel but without the Palestinians.

Thousands of Palestinians in the occupied West Bank and besieged Gaza Strip have poured out onto the street in immediate condemnation of the plan.

Ismail Haniyeh, the head of the Hamas political bureau, has called on the heads of Muslim and Arab states to “categorically reject” Trump’s Middle East scheme.

In a letter to the heads of the Islamic states, Haniyeh warned that the Palestinian people “will never forgive any kind of participation or support” for Trump's "Deal of the Century".