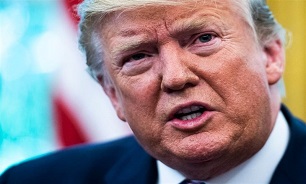 The revelation in a court filing around midnight on Friday came just hours after US senators holding Trump's impeachment trial voted largely on party lines against hearing witnesses that could have shed further light on the hold, an issue at the heart of Trump's impeachment for abuse of power and obstruction of Congress.

The Office of Management and Budget (OMB) "has redacted portions of 24 documents pursuant to the Presidential Communications Privilege," OMB's deputy general counsel Heather Walsh said in a court filing, cited by US media.

The filing is in response to a freedom of information request for documents related to the Ukraine aid.

Trump was impeached by the Democratic-controlled House of Representatives for abuse of power related to his withholding of $391 million in congressionally-approved security aid to Ukraine.

Democrats said he conditioned the aid on Ukraine's announcing investigations, including into his potential 2020 election challenger Joe Biden.

"Specifically, the documents in this category are emails that reflect communications by either the President, the Vice President, or the President's immediate advisors regarding Presidential decision-making about the scope, duration, and purpose of the hold on military assistance to Ukraine," Walsh wrote, AFP reported.

She added that disclosure of documents identified as subject to presidential communications privilege "in this case would risk harming the quality of the information and advice available to the president."

"Make no mistake, the full truth will eventually come out and Republicans will have to answer for why they were so determined to enable the president to hide it."

According to The New York Times, former national security advisor John Bolton said Trump told him in August that he wanted to freeze military aid to Ukraine until Kiev helped with investigations of political rivals including Biden.

The accusation reportedly comes in a draft of Bolton's forthcoming book.

Bolton is among the witnesses the Democrats wanted to testify at Trump's Senate trial.