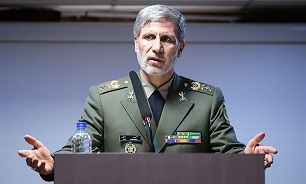 In an address to a gathering of military officials on Tuesday, General Hatami said Iran has made remarkable and “eye-catching” advances in the sphere of ground, air and naval combat, in the aerospace field and in the air defense over the past 40 years.

He said local experts have celebrated numerous achievements in various areas of air defense, and the Iranian Armed Forces face no limits in countering aggressors with various short, medium and long-range weapons.

The minister also noted that 90 percent of the military gear needed by the Iranian Armed Forces are being manufactured inside Iran, and that local experts and scientists have developed 770 products for the defense industry.

General Hatami further pointed to the massive presence of people in the funeral of top Iranian commander Lt. General Qassem Soleimani, who was assassinated in a US strike in Iraq last month, saying Iranians gave a crushing response to the US’ maniacal and criminal behavior and proved that they abhor the arrogant and aggressive policies of the US government.

He went on to say that a retaliatory Iranian missile attack on the US airbase of Ain al-Assad crushed the American might and was like a hard slap in the face of the US that proved the Islamic Republic’s great missile power and determination.

On January 8, Iran’s Islamic Revolution Guards Corps (IRGC) targeted the Ain al-Assad in the western province of Anbar, in retaliation for the assassination of Lt. General Soleimani.

Fifteen missiles rained down on Ain al-Assad airbase, none of which were intercepted by the US army’s radar system.

The Pentagon has admitted that at least 109 US troops have suffered brain injuries in the Iranian strike.