TEHRAN (defapress) – According to the announcement made by the Spokesperson of the Iranian Foreign Ministry, the Red Cross Society of China will send its first voluntarily consignment, including 20,000 coronavirus test kits and other medical equipment to fight the virus, to Iran on Friday.
News ID: 80347 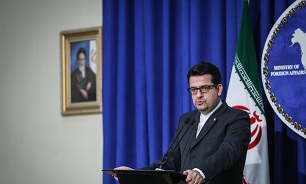 The freight will be transported to Iran by Mahan Air, Abbas Mousavi said.

He also informed of tight cooperation between foreign ministry with health ministry for curbing the virus.

The foreign ministry has supply of medical requirements form international sources on agenda.

According to a senior official in Iran’s health ministry on Wednesday, the death toll from the coronavirus outbreak, officially known as COVID-19, in Iran rose to 26 with 245 confirmed cases.

Health Ministry Spokesman Kianoush Jahanpour announced that from among 245 announced cases, 106 ones are the most recently confirmed ones, of which 38 ones are in Tehran, 23 from Gilan, 7 in Qom, one in Hamedan, 8 in Isfahan, 7 in Mazandaran, 5 in Ardabil, 3 in Alborz, one in Razavi Khorasan, 3 in Semnan, 3 in Lorestan, one in Kordestan, one in Yazd, one in West Azarbaijan, and 2 in East Azarbaijan.

According to the latest reports, coronavirus has caused 2,800 deaths, while 80,000 people have been diagnosed with the illness across the globe, by the present time.

The coronavirus is spreading in the Middle East, Europe and other parts of the world, as Brazil confirmed its first case in Latin America, while parts of China begin to lower their emergency response level as the number of new cases reported there continues to slow.

More deaths have been reported in Iran and Italy.