TEHRAN (defapress) – The Syrian army has a full right to respond to terrorist attacks on its territory, Russian Permanent Representative to the United Nations Vasily Nebenzya said.
News ID: 80367 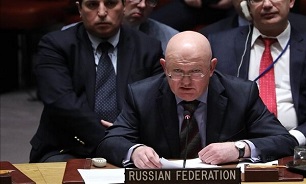 "In response to the ongoing violations of the ceasefire regime within the zone of Idlib, the Syrian army certainly has the right to respond and suppress terrorists," Nebenzya said speaking at the UN Security Council session on the situation in the Syrian province of Idlib, according to TASS.

"We cannot forbid the Syrian army to fulfill requirements, stipulated by the UN Security Council resolutions on the unconditional fight against terrorism in all of its forms, particularly on its territory - the territory of sovereign Syria," Nebenzya added.

The Russian diplomat also turned the attention of the session participants to attempts of justifying terrorists in regard to the situation in Idlib.

"Unfortunately, it comes at the level of officials, including representatives of the United States," he added.

Russia firmly believes that the deconfliction mechanism will help to avoid casualties among the Turkish and Syrian military in Syria’s province of Idlib, Nebenzya was quoted by TASS as saying.

"We regret that Turkish military servicemen were killed as well as we regret the deaths of Syrian soldiers," Nebenzya said speaking at the UN Security Council session on the situation in the Syrian province of Idlib.

"We are confident that the implementation of agreements, including on the deconfliction, will help to avoid such tragedies in the future," he said.