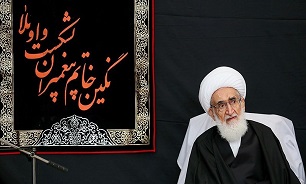 “These days, there is sad news about the situation of the oppressed Muslims in India which causes sorrow,” Ayatollah Nouri Hamedani said in a message.

“Unfortunately, these heinous and painful crimes are being carried out amid the silence of the international media as heads of state of Islamic countries and human rights organizations are only watching the disaster,” the cleric added.

“The Indian people, with their ancient history and culture, will undoubtedly preserve the peaceful life they have had with different religions throughout history, and will not allow anyone to ignite the fire of discord in that country,” Ayatollah Nouri Hamedani stated.

The senior cleric further expressed hope that the Indian government would end this issue as soon as possible.

The attacks were carried out on protesters who have been rallying against a new citizenship law, after the ruling Bharatiya Janata Party (BJP) leader Kapil Mishra threatened peaceful sit-ins would be removed from the streets.

The violence in Delhi killed scores of people.

It was the worst violence in Delhi since 1984, when more than 3,000 Sikh minority were killed following the assassination of then-Prime Minister Indira Gandhi.