TEHRAN (defapress) – Iran’s Foreign Ministry summoned the Swiss ambassador, whose country represents the US interests in Iran, over the US president’s baseless allegations against the Islamic Republic after a recent attack on a military base used by the coalition forces in Iraq.
News ID: 80507 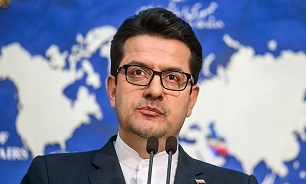 “Following the baseless remarks by the US president that the Islamic Republic of Iran is held accountable for the attack on the base of coalition forces in Iraq’s Taji, the Swiss ambassador to Tehran, (whose country) represents US interests, was summoned by the Director General for the Americas of the Ministry of Foreign Affairs to the ministry on Friday evening, March 13, 2020, and was notified of our country’s strong protests against those comments (by the US president),” Foreign Ministry Spokesman Seyed Abbas Mousavi said on Saturday.

“(He) was told in the meeting that instead of accusing others, the US president must accept the truth about the wrong US policies on the illegal presence in Iraq and the killing of the Iraqi commanders and soldiers, which have become the main reason for the Iraqi people’s hatred towards America, and it was emphasized that the wrong US policies in Iraq have in fact created the current tensions, and that the US officials, Mr. Trump in particular, could not shirk responsibility by making groundless and dangerous remarks,” the spokesperson added.

He went on to sy that the Swiss ambassador has been warned of the consequences of any ill-advised measure from the Americans.

The US claims that Iranian-backed forces have been behind the rocket attack on the military base that killed a British and two US service members in Camp Taji in Iraq.