TEHRAN (defapress) – As dire conditions beset the world, Internet activists are advertising a hashtag promoting the religious prophecy that a savior would resurrect soon and relieve the world of its suffering.
News ID: 80745 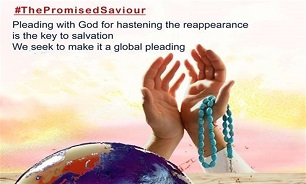 #ThePromisedSavior rallies those subscribing to the belief that features in various religious faiths.

Shiite Islam believes the Savior is the Twelfth Shiite Imam, Imam Mahdi (PBUH), also known among the faithful as the Imam of Time, while Christianity considers that redeemer to be Jesus Christ (PBUH).

The activists are looking to get the hashtag trending across social media platforms on Wednesday, Press TV reported.

Already, it has attracted throngs of believers from the Persian Gulf’s littoral countries including Iran — where the overwhelming Shiite majority hold the belief very dear — as well as people from the countries of the European Union and the United States.

Observers say various plights that have come to pass over the recent years across the world have had subscribers to the faith wondering whether the world’s suffering has reached the point that entails the realization of the prophecy.

They cite conflicts in the Middle East, the emergence of the brutal Takfiri terror group of Daesh, natural disasters such as the wildfires that began raging in Australia last year, and the surfacing of the fast-spreading and deadly new coronavirus as some of the phenomena that have reinforced the belief that the promised savior will soon emerge.

The Daesh terrorist outfit shed much blood, mostly in the Middle East and Central Asia, before suffering defeat in Iraq and Syria, where it had first raised its head.

The far-and-wide wildfires claimed 34 people and an estimated one billion animals before coming under control to some extent this year, while the new virus that emerged in central China late last year has so far taken more than 82,000 lives worldwide.