TEHRAN (defapress) – Leader of the Islamic Revolution Ayatollah Seyed Ali Khamenei said while the coronavirus global pandemic led to the revival of the Wild West, Iranians shone brightly in such a major test and indicated the pure nature of the Iranian and Islamic culture and lifestyle.
News ID: 80753 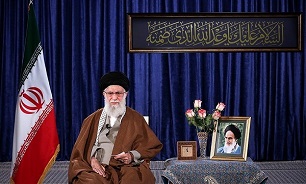 Ayatollah Khamenei on Thursday addressed the Iranian nation in a live televised speech on the occasion of the 15th of Sha’ban, which is the auspicious anniversary of the birth of the 12th Shiite Imam, Imam of the Age (may Allah hasten his long-awaited reappearance).

Describing the outbreak of the coronavirus as a test for both governments and nations across the world, the Leader said the Iranian people shone greatly in such a test, which he likened to a “modern cholera”.

Ayatollah Khamenei said the most crowning glory amid the nationwide efforts to deal with COVID-19 belongs to the Iranian medical society and health personnel.

Paying tribute to Iranian physicians, nurses, laboratory and radiology experts, medical staff, service workforces, researchers and managers for their valuable efforts and devotion to duty, the Leader noted that they have been tolerating the pain of being away from their families and said a good memory of the medical society has been ingrained in the minds of the Iranian people.

Ayatollah Khamenei also lauded the country’s Armed Forces for their great contribution to the battle with the coronavirus, saying the military forces employed their full capacities to provide valuable help including by producing medical equipment and setting up hospitals and convalescent homes.

The assistance offered by the Armed Forces unveiled capabilities that had been unknown so far, Ayatollah Khamenei added.

The Leader further lauded people for their close cooperation and creating “beautiful and incredible scenes” in the course of countrywide plans to help their fellow citizens, citing a number of cases in which people of various cities are distributing free food, producing masks at home, and helping each other.

Such examples indicate “the deep-rooted Islamic culture in the hearts of people”, the Leader said, adding that such voluntary movements were against the objectives of those who have tried to humiliate the Iranian and Islamic culture and to promote the Western culture and lifestyle.

Ayatollah Khamenei also stressed that the outbreak of the coronavirus laid bare the true nature of the Western culture and civilization and illustrated the result of the Western training in the US and Europe.

The Leader pointed to several recent reports that the Western governments have stolen and confiscated the shipments of masks and gloves belonging to other governments, or the cases in which people in the Western states have snapped up everything in the stores in a short span of time.

Western media outlets have even shown a number of people grappling with each other over toilet paper, or people queuing up to purchase guns for safety, the Leader noted.

Ayatollah Khamenei added that even coronavirus patients are being discriminated against in the West, as some old patients have not been treated because efforts to save them have been deemed unnecessary.

Some people have also committed suicide in the Wets for fear of death and catching coronavirus, the Leader noted, saying all these facts are the “logical and natural results” of the Western culture which revolves around materialism, individualism and atheism.

Referring to the comments by a Western senator, Ayatollah Khamenei said the West, unlike its neat and clean appearance, has a hidden dimension and the outbreak of COVID-19 became a “symbol of revival of the Wild West.”

The Leader further said that although the coronavirus pandemic is a problem for humanity, it is not very serious compared to many other disasters that have happened in the past.

Ayatollah Khamenei made a reference to the deaths of millions of people in the two world wars or the fatal attacks that former Iraqi dictator Saddam Hussein launched against Iranian people three decades ago.

The very same self-proclaimed civilized nations used to provide Saddam with chemical weapons that killed thousands of Iranian and Iraqi people, the Leader noted, adding that the world has also witnessed the massacre of people in the Vietnam War or recently in the military attacks on Iraq.

The coronavirus outbreak is not more serious than many other incidents that have occurred in the world in the past, and even today many people are living under the pressure of cruelty and tyranny of enemies and the powerful countries, such as the people of Yemen and Palestine, the Leader stated.

Elsewhere, Ayatollah Khamenei warned that the coronavirus should not make Iranians forget about the plots hatched by the enemies and the arrogance whose hostility is targeting the nature of the Islamic Establishment and Islamic democracy.

The Leader finally urged the Iranian officials to implement the schemes to help the vulnerable social groups amid the coronavirus outbreak, and also asked people to help those who have difficulty in earning a livelihood these days.