Rouhani thanks people, businesses for help in fighting coronavirus

TEHRAN (defapress) – Iranian President Hassan Rouhani said that people and businesses have helped a lot for fighting coronavirus by observing health protocols alongside the relentless efforts of the country’s medical staff and health sector.
News ID: 80828 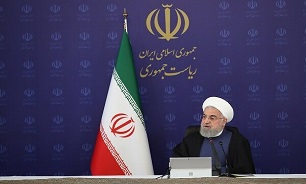 Speaking on Sunday at the session of the National Task Force for Fighting Coronavirus, President Hassan Rouhani said, "With the new screening methods implemented in provinces throughout the country, people close to COVID-19 patients will be tested and this important step takes us closer to harnessing the disease.”

“I deem it necessary to thank the great Iranian nation; because low-risk businesses restarted their activities from April 11 in different provinces, of course, in Tehran, they started from yesterday, and it was very important for us to see if people cooperate fully or partially,” he added.

Rouhani noted, “Overall, the report we had yesterday and today is that people have been very helpful and cooperative. This success is also due to people and business owners observing health protocols.”

“On the other hand, we have to thank the medical staff who work day and night in different hospitals for screening and other programs. Thank God, their figures have been becoming more promising every day in recent days,” he added.

Iranian President went on to say, “All this is very important for us. On the one hand, people cooperated, and on the other hand, the medical staff worked with all their power.”

“Also at the meeting today, the Ministry of Health and Medical Education raised issues that show that with the new methods, both screening and identification of people with the disease will continue,” he continued.

Rouhani mentioned, “I would like to add a point here, and it is relevant to our discussion today that the situation these days is difficult for all people and around the world, and we do not have a country that is not infected with this virus and has no problems.”

“The virus has affected social and political life, as well as in world politics and the world economy, but it has been -and is- more difficult for our people, one of the reasons is sanctions, which many countries do not have,” he added, saying, “The next issue that was perhaps more difficult for us was that these days we had Nowruz holidays during which we stopped our traditions, and it was difficult for people.”

President continued, “Not all countries had this ceremony, and we were among the countries that have this ceremony at a high level, and our lifestyle is such that this situation has become more difficult for us, that is, we have large gatherings.”

Rouhani noted, “Holy places always have a lot of attraction for us, which increases during the holy month of Ramadan. It is also difficult for us to tell people that during the month of Ramadan, the previous conditions must continue until mid-Ramadan.”

“We ask all the dear people that in these last days of Sha'ban and next week, when we enter the month of Ramadan, due to these circumstances, not to hold congregations,” the President said.

He went on to say, “I would like to thank the organs and institutions that continued their hard work in the past two months and in this difficult situation; of course, they followed the health protocols and, thank God, we achieved great project openings.”

“In the past week, we had four major projects opened in water and electricity, and in the coming weeks we will have large openings until the end of Ramadan and after Ramadan,” he added.

“I have to thank the Ministry of Cooperatives, Labour and Social Welfare, which last week offered shares in the stock market and the capital market; this was very important. I call on all public and private institutions, the armed forces and all those who can, to bring their companies to the stock market,” Rouhani said.

“The next issue was the reopening of medium-risk businesses; other low-risk businesses had begun their work in provinces last week and began this week in Tehran. There are high-risk businesses that are closed now, like restaurants where people sit there and eat together, it is high-risk, or stadiums, or any place where there's a gathering, a seminar, a conference, a celebration, and congregations, there is no difference,” he added.

“In the case of prisoners, we had previously decided to stay on leave today, because today is the last day of the months. Of course, at the previous session, we also discussed the issue and delayed it, and of course, the judiciary itself has very good decisions,” the President noted.

He said, “We have not made a new decision regarding schools and universities, except that universities can have their face-to-face educational activities in the field of doctoral education, and the rest remains the same to see what our future conditions will be. Universities and schools will continue education through the Internet.”

“There was a discussion at the meeting that dear Iranians who are abroad, whether students or non-students and want to return to Iran, have a protocol that has been announced. Everyone must follow the protocol; there will definitely be quarantine for them from the country they fly back, and in this quarantine, they will be tested. If their test result is negative, they can go back with the same flight, but if not, they will remain in quarantine for a while,” Iranian President added.