TEHRAN (defapress)- Iran’s Deputy Foreign Minister for Political Affairs Seyed Abbas Araqchi said that while his country is fighting against the coronavirus, the US sanctions have added to the difficulties that the Iranian people are facing.
News ID: 80895 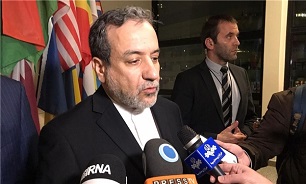 Araqchi made the remarks in a phone conversation with his Norwegian counterpart Tore Hattrem on Wednesday.

He referred to the outbreak of coronavirus and the importance of maintaining cooperation to fight the pandemic, and highlighted the adverse outcomes of the US unilateral sanctions against Iranian people in this hard situation.

Both sides also discussed holding next round of Iran-Norway political consultations in Oslo, regional developments like the Hormuz Peace Endeavor (HOPE) initiative as proposed by the Iranian President Hassan Rouhani, establishing peace in Afghanistan, the latest conditions in Iraq and the importance of continuing humanitarian aid to Yemen.

They also reviewed the outbreak of coronavirus in the world, bilateral ties, regional and international developments.

Hattrem, for his part, expressed solidarity with Iranian government and people in fighting coronavirus.

The diplomat underlined Norway’s multilateral policy in the international arena, helping international bodies with regard to people’s health and continuation of consultations with Iran for establishing security and stability in the Persian Gulf and West Asia.

The coronavirus COVID-19 is affecting approximately all countries and territories around the world. The virus was first reported in the central Chinese city of Wuhan late last year. It has so far killed more than 184,300 people and infected over 2.64 million others globally.

said that people with a more serious condition will stay at the hospitals, adding that the public places will be disinfected, the entries of infected towns and cities will be controlled to diagnose and quarantine the infected cases.