US, Israel behind Germany’s Blacklisting of Hezbollah

TEHRAN (defapress) – The secretary-general of Lebanon’s Hezbollah resistance movement strongly condemned Germany’s banning of his group and its designation as a terrorist organization, saying the move was taken under pressure from Israel and the United States.
News ID: 81013 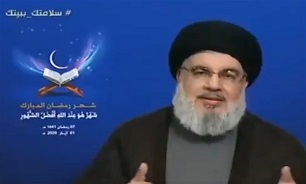 “Germany’s decision to ban Hezbollah on its soil was anticipated as it was made as a result of US pressure. The German government’s accusations against Hezbollah are unsubstantiated since it has failed to present any convincing proof of terrorist acts allegedly attributed to the movement,” Seyed Hassan Nasrallah said in a televised speech broadcast live from the Lebanese capital city of Beirut as he addressed supporters on Monday afternoon, Press TV reported.

He added that Berlin follows what Washington and Tel Aviv dictate to it in their radical rhetoric against Hezbollah, adding that the German government’s accusations “of promoting armed struggle through terrorist means,” which have been leveled against the Lebanese resistance movement, are totally baseless.

“The US seeks a project of hegemony in the region, whilst the Israeli regime pursues a scheme of occupation,” the Hezbollah chief said.

Nasrallah then called upon the Lebanese Ministry of Foreign Affairs and Emigrants to protect his resistance movement against the ban.

Nasrallah also emphasized that Hezbollah has decided not to have any organized presence outside Lebanon in order to prevent its supporters in other countries get embroiled in any kind of trouble and embarrassing situations.

“Hezbollah will remain at the forefront of the fight against the Israeli occupation and US hegemony in the region,” he underlined.

Elsewhere in his remarks, Nasrallah said the Lebanese government is working on a comprehensive plan in order to resolve economic problems in the country, stressing that Hezbollah supports such a decision and contributes to its fruition.

The Hezbollah head then urged all Lebanese political factions to put aside bickering, and do their share of rendering assistance to the government’s economic vision plan.

He demanded due vigilance as regards financial aid from foreign countries, stating that Hezbollah is not opposed to the Lebanese government’s request for assistance from the International Monetary Fund (IMF) but does not accept capitulation to its constraints.

Nasrallah also dismissed recent financial accusations against Hezbollah as nothing but psychological warfare, saying his group “does not want anything from Lebanon’s banking sector, and has never been involved in monetary activities.”

He urged the Arab country’s banking system to act rationally, and not take sides with the US.

“Lebanon’s banking sector is not lending a helping hand with the nation. It only follows US diktats and has so far failed to adopt a measure aimed at uplifting people’s lives,” Nasrallah pointed out.

He also brushed aside allegations that Hezbollah is collecting the dollars it possesses and funneling them either to Syria or Iran.

The Hezbollah chief called on the Lebanese government to work out a solution to the country’s surging inflation rate, describing the fight against corruption as an important battle for Lebanon’s future.

He also noted that Hezbollah is ready to help the Lebanese health sector in the fight against the novel coronavirus pandemic.

Nasrallah further underlined that there are no disputes between his movement and the Amal Movement, stating that the two are closely cooperating with each other on a broad array of issues.