TEHRAN (defapress) – Lebanon’s health minister said the Arab country has received the first shipment of medical aid from Iran to help Beirut in its fight against the coronavirus.
News ID: 81016 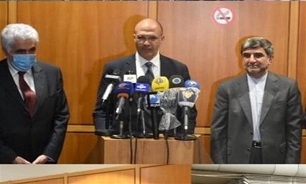 "Iran's help is much appreciated while the country is struggling at the same time to fight against the virus," Hamad Hassan said during a ceremony held at the airport to receive the donation, The National News Agency reported on Monday.

Iranian Ambassador to Lebanon Mohammad-Jalal Firouznia said that the PCR tests were made in Iran as the country is now capable of exporting such products to other countries.

"We are always ready to help the Lebanese people in all fields especially in the medical area," he said.

Lebanon currently has a total of 740 confirmed coronavirus cases and nearly 25 deaths. The Health Ministry has announced a total of 200 recoveries since the first case of coronavirus was declared on February 21.