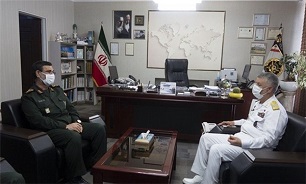 Rear Admiral Khanzadi made the remarks in a meeting with Commander of the IRGC Navy Rear Admiral Alireza Tangsiri who headed a delegation of commanders and deputies to extend his condolences over the martyrdom of 19 Iranian navy forces in the recent incident in the Sea of Oman.

“Today, the atmosphere of cooperation between the Army and IRGC Navies is strong and effective,” he added.

Rear Admiral Tangsiri, for his part, said that Iran’s defensive might and deterrence power is owed to the unity and integrity of the Iranian Armed Forces under the measures and guidelines of Commander-in-Chief Ayatollah Seyed Ali Khamenei.

Nineteen Iranian navy men were martyred and 15 others injured in a fatal incident for the Iranian Army Navy’s Kenarak support vessel in the country’s waters near the Southern port of Jask in the Sea of Oman last Sunday.

The incident happened during the Iranian Navy drills, the public relations office of Bandar Abbas First Naval Zone of the Navy reported.

The Navy's public relations also declared in a statement that 19 Navy personnel have been martyred and 15 injured, adding that rescue teams were quickly deployed to the site where they evacuated the wounded.

The Navy said the vessel has been towed to the port for further investigations.