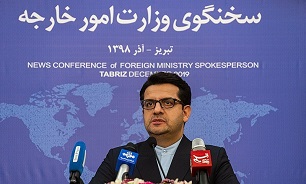 In a statement on Thursday, Seyed Abbas Mousavi condemned the new sanctions and said the US regime’s addiction to imposition of sanctions is indicative of the country’s unlawful and arbitrary behaviors against the integrity of international law and order.

“The US regime targets the legal bodies and officials of independent governments with its hostile policies,” Mousavi noted.

“The futile, repetitive, and blind sanctions imposed by the US regime against the interior minister, the commander of the Law Enforcement, and other officials of our country indicate the weakness, desperation, and confusion of the US regime,” the spokesman noted.

He said the new sanctions have been imposed based on Washington’s usual delusions, under the influence of ill-informed advisors, and in reaction to the regime’s failures vis-� -vis the strong resolve of the Iranian nation and government.

“By imposing and implementing such sanctions, the United States has ignored deep-rooted internationally-accepted decency and conventions, and has directly targeted individuals and bodies who are closely intertwined with the order and security of the Iranian nation, and the security of the region in a broader sense,” he concluded.