TEHRAN (defapress) – Deputy Chief of Sarallah Headquarters Brigadier General Esmail Kosari on Tue. said that Iran’s export of gasoline to the Bolivarian country of Venezuela has been made within the framework of international rules and regulations.
News ID: 81236 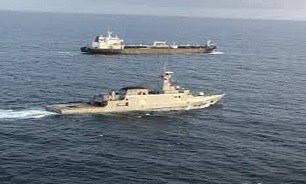 The brigadier general also referred to the amicable bilateral ties between Islamic Republic of Iran and Venezuela and emphasized, “fortunately, the relations between Iran and friendly country of Venezuela is very close and intimate, so Islamic Republic of Iran responded positively to their request and sent five tankers, carrying gasoline, to this country and announced its readiness to repair and construct its refineries.”

He termed Iran’s move in sending gasoline to Venezuela as 'an authoritative move' and added, “Iran’s move in this regard has been taken in line with national interests and objectives.”

The United States understood well that if they block Iran’s sending of gasoline to Venezuela, such illogical move would have negative consequences for them, Kowsari added.