TEHRAN (defapress) – Russia’s Ambassador in Washington Anatoly Antonov branded as baseless the allegations that Moscow has been helping the provocateurs in the wake of unrest in the United States.
News ID: 81267 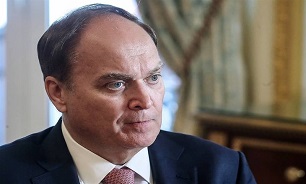 "Now, we are blamed for allegedly being behind the scenes, almost giving a helping hand to the provocateurs who are destabilizing the situation. It is a total nonsense," the diplomat told Russian reporters on Saturday. "We are determined to merely have pragmatic cooperation with the US."

According to Antonov, the anti-Russian sentiment is not a novelty in the US.

"Regrettably, it can be related to what the Americans are going through now and those problems they are trying to sort out," Antonov continued. "A part of the US political elite is poisoned with Russophobia, as it has become fashionable to use anti-Russian statements and the Russian factor to justify their problems and, perhaps, either inaction or inability to solve them."

He pointed out that the Americans would go through this turbulent times quickly and Russia wishes them success. According to the ambassador the murder of Afro-American George Floyd was unacceptable, TASS reported.

"We are with the Americans," he added.

"Many and many years are to come for Russophobia to become obsolete," Antonov stressed. "Whatever happens this November (during the US presidential election), I think that Russophobia will be coming back to the US public life after some period of time."

Widespread unrest has engulfed many US states over the death of an African-American Minneapolis man named George Floyd, who died after a police officer kneeled on his neck and choked him to death during his arrest. On May 26, all officers involved in the deadly arrest were fired. On May 29, the policeman in question, Derek Chauvin, was arrested on third-degree murder and second-degree manslaughter charges. However, on June 3, Minnesota Attorney General Keith Ellison upped the charge against Chauvin to second-degree murder. The three other officers involved in the fatal incident were arrested as well and are now facing charges of aiding and abetting second-degree murder.

To counter the riots, local law enforcement is often supported by the National Guard. So far, 40 cities, including New York, have enacted a curfew.