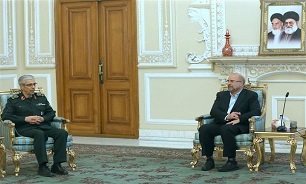 A group of top Iranian military commanders held a meeting with Speaker of the Iranian Parliament Mohammad Baqer Qalibaf on Monday.

For his part, Chief of Staff of the Iranian Armed Forces Major General Mohammad Hossein Baqeri said the new Parliament includes many veterans and reliable forces, expressing hope that the new MPs would resolve many outstanding issues.

The top general also called for a reform of the law on using guns after 26 years, and a revision of the law on compulsory military service.

Qalibaf, himself a war veteran and a former commander of the Iranian Police, was elected speaker of the new Iranian Parliament on May 28.