TEHRAN (defapress) – In a congratulatory message to his Russian counterpart on Russia Day, Iranian Foreign Minister Mohammad Javad Zarif highlighted the contribution that the cooperation between Tehran and Moscow is making to international stability and security.
News ID: 81307 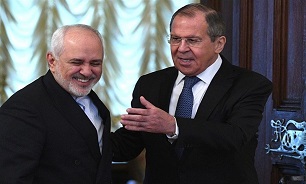 In a message on Friday, Zarif congratulated Foreign Minister of Russia Sergei Lavrov on the National Day of the Russian Federation.

“In light of the resolve and determination of the two countries’ leaders and senior officials, there is fortunately a growing trend in the bilateral interaction for the fulfillment of the common interests and contribution to the regional and international stability and security, and I hope that it would continue and deepen,” the top Iranian diplomat said in the message.

Russia Day, called Day of adoption of the declaration of state sovereignty of Russian Soviet Federative Socialist Republic (RSFSR) before 2002, is the national holiday of the Russian Federation. It has been celebrated annually on June 12 since 1992.