Iran to be focus of IAEA Board of Governors meeting

TEHRAN (defapress) – Russia's Permanent Representative to International Organizations in Vienna Mikhail Ulyanov said that Iran is expected to be the focus of attention in the virtual session of the IAEA Board of Governors.
News ID: 81318 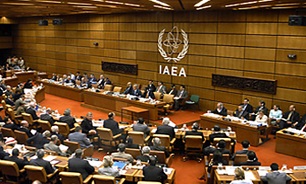 In a Sunday tweet, Ulyanov wrote, "Virtual session of #IAEA Board of Governors is scheduled to start at 10 a.m. on 15 June. It may be lengthy, taking into account a big number of agenda items."

"#Iran is expected to be the focus of attention," he added.

He had previously said the meeting would be held virtually due to the Covid-19 outbreak.

In an earlier tweet, he had said that "Problems with access of #IAEA to 2 sites in #Iran stem to a large extent from the fact that there are no clear rules in the Agency on the use of information received from third countries. It is high time to address this issue, as Russia proposed long ago, to prevent a repetition."

Prior to this, Laurence Norman, the correspondent for The Wall Street Journal in Brussels wrote on Friday, "understand there's a right royal mess in Vienna ahead of next week's @iaeaorg board. Understand the Americans want a resolution agreed condemning #Iran lack of cooperation with the agency on safeguards."

"That of course will not find favour among other leading @iaeaorg board members, like Russia and China. And the Europeans? Unclear so far. But that's not the only fight happening. Russia and @Amb_Ulyanov have been clear that since next week's meeting is a virtual one (cos of COVID), they don't believe any formal decisions can be taken by the Board," he added.