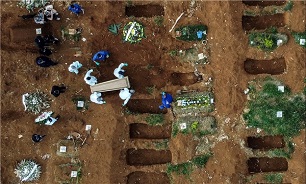 Brazil also recorded 612 new COVID-19 deaths over the past 24 hours, bringing the country’s death toll to 43,332, according to the country's Health Ministry, America News reported.

Brazil is one of the few large countries in the world where coronavirus cases — and death rates — are still rising.

It is Latin America's hardest-hit country, with confirmed cases climbing by the thousands each day, while only the United States has more confirmed cases and fatalities than Brazil.

Experts estimate the real number of infections could be up to 15 times higher than official figures, given relatively little testing across the vast country of 210 million.

Brazil's President Jair Bolsonaro had threatened to pull his country out of the World Health Organization (WHO) after the United Nations agency warned governments about the risk of lifting lockdowns before slowing the spread of the new coronavirus.

A leading medical journal has described Bolsonaro as "perhaps the biggest threat" to Brazil's ability to successfully fight the coronavirus pandemic.

Brazil's health crisis has merged with a political crisis, as Bolsonaro has openly clashed with local authorities insist on lockdown measures.

The virus epidemic already resulted in two health minister resignations in Brazil due to differences of opinions and other disagreements with the head of state.

Hospitals in several areas are meanwhile operating close to full capacity, and the hardest-hit cities have begun burying victims in mass graves.

As parts of the US and Europe moved to gradually ease social distancing measures and open certain economic sectors, Latin America's largest nation has been emerging as the new hotspot of the coronavirus.