No need to overdramatize dispute on IAEA's access to Iranian sites

TEHRAN (defapress) – Russia has expressed concerns over the recent dispute between Iran and the International Atomic Energy Agency (IAEA) on two locations in Iran, saying the issues should not be overdramatized.
News ID: 81353 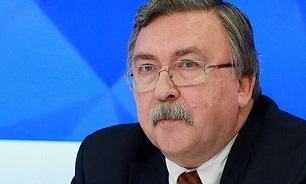 “Deeply disappointed and concerned that #Tehran and the Secretariat are yet to resolve the issue of access to two locations in Iran that are of interest to the Agency,” Russian Ambassador and Permanent Representative to the International Organizations in Vienna Mikhail Ulyanov was quoted as saying by Russian Mission in Vienna on Thursday.

“However, there are no reasons whatsoever to overdramatize the situation,” he added.

“We are dealing with minor procedural problems which relate to the beginning of this century with no projection to the current situation,” he noted.

US Governor to the International Atomic Energy Agency Board of Governors Jackie Wolcott repeated the claims of Iran’s secret nuclear activities and called for approving an anti-Iran resolution in the IAEA BoG meeting.

Following the US' lead, France, Britain and Germany, all parties to Iran’s nuclear deal with world powers known as the Joint Comprehensive Plan of Action (JCPOA), have submitted the draft to the IAEA Board of Governors calling on Iran to allow access to the sites.

He said that adopting such a resolution will ruin chances for a “possible agreeable solution.”