US Attorney Agrees to Step Down After Trump Fires Him, House Democrats Launch Probe 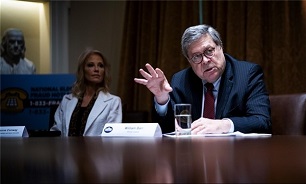 Shortly afterwards, Berman, who had defied Barr's earlier demand for his resignation, announced that he would not resist the order and would step down, leaving the high-profile prosecutor's office in the hands of his deputy, Audrey Strauss, NBC News reported.

Trump himself, when asked about Berman's firing Saturday afternoon by reporters at the White House, said he was "not involved" in the situation and that the decision was "up to the attorney general".

"That's his department, not my department," the president stated, adding, "I'm not involved.”

Barr said in his Saturday letter that he had been "surprised and quite disappointed" by Berman's response on Friday night, saying he had "hoped that [Berman's] departure could be amicable" and had believed there was still a chance he might remain within the administration in some capacity.

"Unfortunately, with your statement of last night, you have chosen public spectacle over public service," Barr wrote, adding, "Because you have declared that you have no intention of resigning, I have asked the President to remove you as of today, and he has done so."

Word of Barr's announcement Friday night had caught senior officials in the Manhattan US attorney's office off guard. His office prosecuted former Trump confidante Michael Cohen, though he was recused from involvement in the case.

Berman suggested he gave up the fight because Barr acknowledged that Berman's deputy, Audrey Strauss, would take over the office, rather than the administration's announced choice, Jay Clayton, the head of the Securities and Exchange Commission.

“In light of Attorney General Barr’s decision to respect the normal operation of law and have Deputy US Attorney Audrey Strauss become Acting US Attorney, I will be leaving the US Attorney’s Office for the Southern District of New York, effective immediately," he said in a statement, adding that he believed Strauss and her team "will continue to safeguard the Southern District’s enduring tradition of integrity and independence”.

It was a marked departure from his defiant statement Friday night, after Barr's initial announcement.

"I have not resigned, and have no intention of resigning, my position, to which I was appointed by the Judges of the United States District Court for the Southern District of New York," Berman stated then, suggesting he would fight his removal from office.

"I will step down when a presidentially appointed nominee is confirmed by the Senate. Until then, our investigations will move forward without delay or interruption. I cherish every day that I work with the men and women of this Office to pursue justice without fear or favor — and intend to ensure that this Office's important cases continue unimpeded," Berman noted.

Barr said that Strauss would remain in position until a permanent successor is chosen, but due to Senate tradition, Clayton's nomination is unlikely to proceed as long as New York's two Democratic senators oppose it, which both said they would do.

A senior administration official stated that “once there was an intent to nominate Jay Clayton as United States Attorney, Attorney General Bill Barr tried to work through a smooth transition. Geoffrey Berman refused all positions offered to him and made a public spectacle, prompting Barr to ask for permission to fire the US Attorney immediately, and President Trump agreed."

The official did not say where the suggestion to replace Berman with Clayton had originated, or why.

Democrats were sharply critical of the move, with House Judiciary Committee Chairman Jerry Nadler tweeting Friday that "America is right to expect the worst of Bill Barr, who has repeatedly interfered in criminal investigations on Trump’s behalf".

"The House Judiciary Committee will immediately open an investigation into this incident, as part of our broader investigation into Barr’s unacceptable politicization of the Department of Justice," Nadler announced in a statement Saturday, adding, "On Wednesday, the Committee will hear from two whistleblowers who will explain why Barr’s attempt to fire Mr. Berman is part of a larger, ongoing, and wholly unacceptable pattern of conduct."

"The whole thing smacks of corruption and incompetence, which is what we have come to expect from this President and his Attorney General," he noted.

Preet Bharara, who preceded Berman in the office was fired in the early days of the Trump administration tweeted, "Doesn't sound like 'stepping down'."

He added, "Why does a president get rid of his own hand-picked US Attorney in SDNY on a Friday night, less than 5 months before the election?"

On Saturday, Barr said Berman’s statement had “wrongly” implied that his leadership was necessary to ensure that pending cases would be handled appropriately.

“This is obviously false,” wrote Barr, saying, “I fully expect that the office will continue to handle all cases in the normal course and pursuant to the Department’s applicable standards, policies, and guidance”, and that allegations of interference should be flagged to the Department of Justice inspector general.

“The Inspector General’s monitoring of the situation will provide additional confidence that all cases will continue to be decided on the law and the facts,” he wrote.