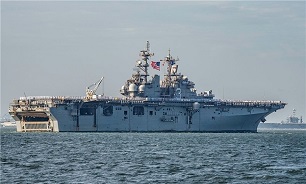 The incident started when a spark from welding landed on nearby material, which was then quickly put out by the fire watch. Fire watch is a sailor or contractor who stands nearby with a fire hose and/or extinguisher to stop a larger blaze in its tracks, Defense News reported.

“On July 17, the Navy was informed of a fire aboard USS Kearsarge (LHD 3), currently conducting a Selected Restricted Availability at General Dynamics NASSCO – Norfolk,” O’Connor said.

“The fire was quickly extinguished by the fire watch and resulted in minimal damage. In response to this incident, the Navy has issued a stop work order for all ships in maintenance availabilities at GD NASSCO Norfolk to ensure compliance with all established fire protocols and procedures,” O’Connor added.

In a phone call Saturday, Anthony Paolino, a General Dynamics NASSCO spokesman, said the incident involved an ember landing on plastic, causing it to melt and smoke, but said there was no larger fire. NASSCO was already reviewing its safety protocols prior to the “stop work” order, and that it fully supported the Navy’s ongoing safety stand down in the wake of this week’s fire aboard Bonhomme Richard, Paolino said.

GD NASSCO was the lead contractor for the pier-side maintenance aboard Kearsarge’s sister ship Bonhomme Richard at the time of the fire that broke out July 12. The Navy said the fire likely originated in the lower vehicle storage area but that there was no known hot work going on in that location at the time.

Both Bonhomme Richard and Kearsarge are Wasp-class amphibious assault ships. Kearsarge has been in maintenance at NASSCO since late last year.

Once those investigations are finished, Gilday will determine whether a broader examination of the Navy’s culture is necessary.

“This is a very, very serious incident that I think will force the Navy to stand back and reevaluate itself,” Gilday said, adding, “We’ve got to follow the facts, we’ve got to be honest with ourselves and we’ve got to get after it. My intention, once the investigations are done, is to make this available for the public to debate, including what we need to do to get after any systemic problems that we might have.”