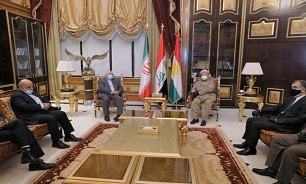 In the meeting with Masrour Barzani, the two sides discussed ways to ties between Tehran and Erbil in different fields. The Iraqi side also called for using Iran’s experience in the fight against COVID-19.

Meanwhile, Massoud Barzani highlighted that the Iraqi Kurdistan region will never become a place to threaten the interests and security of the Islamic Republic of Iran. Barzani also called for boosting trade ties between the two sides.

Zarif arrived in Baghdad on Sunday morning at the head of a political delegation and left Baghdad for Erbil, the capital of the Kurdistan Region, after meeting with Iraqi officials.

In these meetings, international, regional issues, and the case of the assassination of Major General Ghasem Soleimani, the commander of the Quds Force of the Islamic Revolutionary Guard Corps, and Abu Mahdi al-Mohandes, the deputy head of the Iraqi Popular Mobilization Forces, were discussed.

Iranian Foreign Minister Mohammad Javad Zarif tweeted on Sunday before leaving for the Iraqi Kurdistan region that his consultations with Iraqi officials were productive.

Upon arrival in Iraq, Iranian Foreign Minister visited the site where top Iranian Commander Lieutenant General Ghasem Soleimani, Second-in-Command of the Iraqi Mobilization Units Abu Mahdi al-Muhandis as well as their companions who were martyred near Baghdad International Airport and paid tribute to them.