TEHRAN (defapress)- Syrian President Bashar al-Assad and Senior Assistant to Iran's Foreign Minister for Special Political Affairs Ali Asqar Khaji in a meeting in Damascus conferred on the latest developments in Syria as well as ways to boost cooperation between the two countries.
News ID: 81816 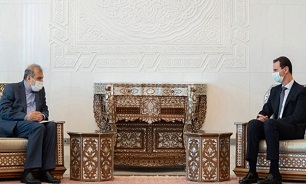 During the meeting on Monday, the two sides held talks on the latest developments in Syria and the meeting of the Constitution Committee in Geneva.

President al-Assad affirmed that Syria will go forward on the present track despite all attempts by some parties to divert the committee from its tasks and the objective of its formation and change its mechanisms.

The two sides also discussed means to enhance cooperation between the two countries to face the siege imposed by the US and its allies against Syria.

Khaji, for his part, underlined the importance of deepening economic cooperation between the two countries to confront the siege.

He also congratulated the Syrian people and leadership for holding parliamentary elections, saying that elections in this period of time proves the adherence of the Syrian people to their land and state and their keenness to participate in the important constitutional events despite all conditions that they are facing.

In the meeting, they conferred on the latest developments in the region and the world.

The Syrian foreign ministry in a statement released on its official Facebook page said in addition to the regional and international issues, the two high-ranking officials also discussed bilateral ties.

The two sides expressed pleasure in continued progress in strategic relations between Iran and Syria in different fields, and stressed the need for exchange of experiences to strengthen the two nations and confront common challenges, including the coronavirus epidemic and the US-imposed economic terrorism, it added.

They also agreed to continue coordination and consultations on different developments, the statement said.

Khaji arrived in the Syrian capital on Monday morning to meet with Syrian officials.