Russia says US compelled Iran to suspend its commitments

TEHRAN (defapress) – Pointing to the danger of US recourse to 'snapback' mechanism, Russian senior diplomat said Washington did its best to compel Iran to suspend some of its nuclear deal commitments.
News ID: 81871 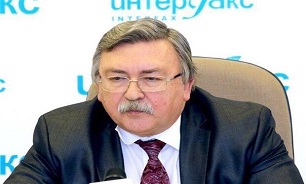 Russia's Permanent Representative to International Organizations in Vienna Mikhail Ulyanov in a tweet on Tuesday wrote, "Once again: US attempts to trigger snapback can damage the UNSC, including in the field of sanctions."

"So far UN sanctions sometimes were not fully implemented, but their validity wasn’t questioned," he added.

"Snapback can change everything. Is that what US wants to achieve? We don’t," he stressed.

In another tweet, Russian diplomat wrote, "The US did it best to compel Iran to suspend some of its commitments under nuclear deal. This is the matter of fact, well documented."

Ulyanov had previously described the US effort to revive UN sanctions against Iran as a "very dangerous adventure" and called on Tehran to respond appropriately and responsibly.